Kishor Parekh’s presence as Chief Photo Editor at Hindustan Times between 1961–67 brought about remarkable change in the arena of Indian photojournalism. During a time when photojournalism was largely restricted to manufactured photo ops, he stepped up and introduced full-page photo essays and insisted that photographers get credit lines. By the time war broke out between India and Pakistan in 1971, Parekh was no longer an active news photographer in his home country, and had relocated to Hong Kong to preside as Picture Editor for a group of magazines. Restless, he travelled to the border near Kolkata equipped with a limited stock of film, and he hopped onto a helicopter transporting a press troupe to Dhaka. Since he was without accreditation and didn’t belong to any press troupe, officials almost didn’t let him through. However, his determination got the better of them and he went on to photograph his most important body of work. 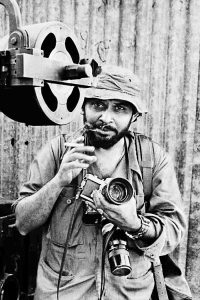