A Meandering Train of Thought The motion blur doubles up as leading lines that guide the eye through the photograph. Photograph/Sarang Naik

By making creative use of camera shake while shooting, Sarang Naik makes dreamy and contemplative images of a railway route.

The hill station of Matheran near Mumbai is my favourite photography haunt. I especially love exploring the toy train railway route. I am a big fan of a photographer named Chris Friel who makes surreal long exposure images using camera shake. Inspired by his work, I decided to shoot a series on the railway route using this technique.

My Perspective
I have a deep respect and love for abstract photography. It forces the viewer to get more involved with the image and make his or her own interpretations. When the usual elements that the mind relies on are removed, the thought process and the emotions behind the image become prominent. It feels to me like stripping off the flesh to reveal the soul within. I liken this series to the inner discourse and the wanderings of my own mind. My images, as such, tend to be a romantic and personal portrayal of the subject rather than a faithful reproduction of it. They need to have enough room for the imagination to run wild. The rails look like scars of countless memories. Their distinct shape makes for a great abstract subject. Photograph/Sarang Naik

The Process
The camera was handheld while making all the images to allow me more freedom of movement. I used a small aperture setting (sometimes, even f/32) with the shutterspeed being anywhere from 1/40sec to 3.2sec. Getting a harmonious movement in the image was the hardest part. I experimented a lot with different shutterspeeds and changed the degree and intensity of the movements to try and hit a sweet spot. It was quite unpredictable and I was often surprised by the results. I realised that specular highlights are my best friends and that is the reason why the rails work so well as the subject—they form sharp and distinct shapes in the final image. The same goes for the milestones, the grass and the train. To make the abstract images work, I needed to keep a discernible hint of the subject for the viewer’s mind to hang on to. This series taught me a lot about the importance of having strong compositions and helped me become a much better black and white photographer. This one was a pleasant surprise. The movement, the shutterspeed and the composition, everything came together perfectly to make a dynamic image. Photograph/Sarang Naik

My Equipment For this series I used the Canon EOS 500D with a Tamron SP 90mm f/2.8 Macro lens. I didn’t use a tripod but if you want to shoot longer exposures then use one to keep some part of the images sharp.

How To Make Unique Images With Camera Shake

You can find more of Sarang’s work on his Facebook page: https://www.facebook.com/SarangNaikPhotography 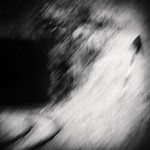 Entering the tunnel. The stark contrast between the shadows and highlights gives this image an eerie and foreboding feel. Photograph/Sarang Naik 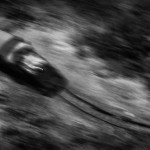 The train is like a thought making its way through the mind’s landscape. I composed this image beforehand and stayed here till the train arrived. Photograph/Sarang Naik 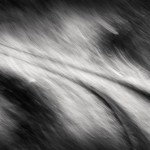 I like cropping my images in a panoramic style as it gives a cinematic and larger than life feel to them. Photograph/Sarang Naik 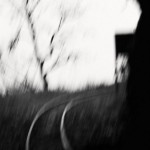 This image was made from inside a tunnel. I included the wall of the tunnel to create a sense of mystery. Photograph/Sarang Naik