BP’s sister magazine, OVERDRIVE, embarks on a unique quest, driving from Manali  to Srinagar. The team travelled across eleven extremely high altitude passes, to raise the glorious Tricolour at Pangong Lake on Independence Day, all in Audi Q3, Q5 and Q7 SUVs. The supermoon sets on the higher reaches of Barlacha-La, on the way to Leh, on August  12 at  5:31 am. At 16,000 feet above mean sea level, this is the second extremely high altitude pass after Rohtang-La. Photograph/K Madhavan Pillai

While nothing can really prepare you for the unbelievably beautiful landscapes of the mighty Himalayas, there was something decidedly very special about the OVERDRIVE Independence Quattro Drive even before it began. The OVERDRIVE team had gotten themselves five variants of the Audi Quattro SUVs. The plan was to take ten selected participants on a fantastic road trip to hoist our national flag on the 15th of August, our Independence Day, at the famous Pangong lake in Ladakh. En route to Wari-La… it is difficult to even imagine that a road can be forged at these heights, all thanks to the Border Roads Organisation. Photograph/Suresh Narayanan

On the way, the group was witness to the oddly unsettling spectacle of the supermoon rising and setting, with the silent mountains in the in the foreground, surrounded by patches of swirling seething clouds in turmoil. To see the valleys, rivers and cold deserts in moonlight is an unimaginably beautiful experience… just as stunning as seeing the milky way in the night skies on a new moon night.

The Himalayas can easily be called the greatest art show on this planet. Be it in the luxury of Audi SUVs with OVERDRIVE or otherwise, photographers must spend some time in the Himalayas, at least once. Its sheer beauty and majesty makes it a truly life-altering experience.

Set against the magnificent backdrop of Pangong-Tso and a brilliant morning sky, the Overdrive team along with the participants and the Audi Quattros pose for a panoramic picture. Photograph/K Madhavan Pillai

The participants of the Independence Quattro Drive got to drive over 1500 kilometers, accompanied by the expert members of the OVERDRIVE editorial team, across some of the most inhospitable terrain on the planet. The group drove through the dizzying, astounding heights of some of the world’s highest motorable passes—Rohtang, Barlacha, Namkila, Lachalang, Tanglang, Khardung, Chang, Wari, Fotu, Namki and Zoji—all of which are closed for eight months of the year, because of snowfall and extreme cold. 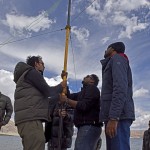 A Wonderful Team Effort to Hoist India’s National Flag at Pangong Lake on the morning of August 15, 2014: Every team member made it a point to contribute to getting the flag hoisted, beginning with selecting the right spot and setting up the mast. Photograph/K Madhavan Pillai 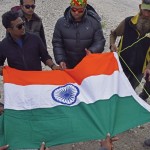 The tricolour flag, carried from Mumbai, had to be unpacked and refolded in an exact sequence so that it would open when the cord is pulled on hoisting. Photograph/K Madhavan Pillai 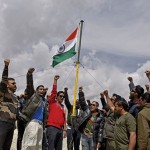 The flag was hoisted barely a few kilometers from the borders between India and China. The Indian National Anthem was sung with great reverance and gusto. Photograph/K Madhavan Pillai

The summer, during which these passes are open from June to September, brings its own share of problems. The  melting banks of snow and glaciers form ice-cold rivulets that wash away the roads in large sections, leaving bare mountainsides.

At  extremely high altitudes, without  the presence of forests, huge rocks and fine gravel continually grind and crumble in the water and wind. The group encountered landslides on the roads that occurred barely hours before reaching the spot. At every point, the men of the Border Roads Organisation braved the elements to clear a path and build the road once again. It  was not lost on the entire group that a single error in judgment while driving, or even just plain bad luck, could result in crashing down a thousand feet or more, into the gorges.

The group travelled through Manali, Leh, and Nubra, to reach Pangong, where the Indian tricolour was hoisted. From  there, they journeyed through Kargil and finally to Srinagar, where the drive finally ended after ten days on the road. 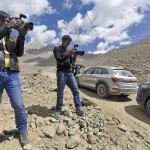 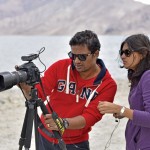 Bertrand D’souza, Editor-in-Chief, OVERDRIVE, reviews a shot with with Sohini Dutt, Senior Producer, CNBC-TV18. All images in this feature were made with the Nikon D810. Photograph/K Madhavan Pillai

At Kargil, the convoy of Quattros made a stop for the group to pay respects at Vijaypath, the Dras War Memorial, built in memory of the hundreds of soldiers who sacrificed their lives for the nation during the Kargil conflict with Pakistan, in  1999. There was a feeling of deep sorrow mingled with the greatest of pride. Nearby, a painted sign quoted John Maxwell Edmonds famous epitaph… “For your tomorrow, we  gave our today”.

Towards the end of the road trip, each of the participants took back with them lots of life-learnings, memories, experiences and friendships. This is what Leh looks like from within the Audi Quattro, as it moves at 110kmph. Photograph/K Madhavan Pillai

The OVERDRIVE Independence Quatro Drive would not have been possible without the support of partners—Audi for the excellent Quattro vehicles, Mobil as a lubricant partner for the road trip, Red FM 93.5 for providing media support and GANT as apparel partner to protect the participants from the extreme weather.