Quote of the Week by Letizia Battaglia

“To create a truly great photograph, you have to work hard and be free. A good photographer needs to be inside the photograph somehow so that the viewer can feel their presence.” —Letizia Battaglia (1935) 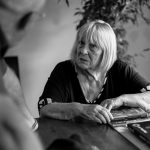 Born in Sicily in 1935, Letizia Battaglia began her photography career in the early 1970s and started photographing the Sicilian Mafia in 1974, even receiving death threats. As the photography director of L’Ora, Palermo’s left-wing daily newspaper, she or one of her assistants was present at every major crime scene in the city until shortly before the paper folded in 1990. From these assignments, Battaglia and her long-time partner Franco Zecchin produced many of the iconic photographs that have come to represent Sicily and the Mafia throughout the world. She has won numerous awards, including the W. Eugene Smith Grant for Humanistic Photography and the Cornell Capa Infinity Award from the International Center of Photography.