13 Award Winning Photographers on Framing a Slice of Life Harish Chavda used to teach Mechanical Engineering full-time, but over the years he has reduced this to concentrate more on photography. He is also constantly involved in camera clubs, societies and other interest groups. He won the first prize in HIPA’s General category.

“While everybody was rooting for Adam Gemili, I decided to place my bets on the veteran sprinter Dwain Chambers, and even focused my lens on him. I now have a picture of a lion roaring to victory!”

37-year-old British track sprinter Dwain Chambers, was not the favourite pick at the 2012 Aviva UK Athletics Olympic trials in Birmingham. The 100 metre race was his one last shot at being a part of the English Olympic team. Despite the pessimism around him, he went on to prove his critics wrong by being the first to cross the finish line in 10.25 seconds.

Harish’s Tip
The Importance of Research
In photography, you will never learn to anticipate the action, unless you have an idea about your subject or of its relevance. This is why, it is important to read as much as you can about the history of say, a festival or a sports event that you are covering. This knowledge will come in handy in ensuring that you are aware of the prime areas of action, thus resulting in great shots. 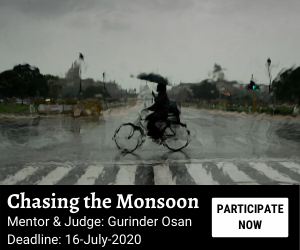